Mar 05 2021, 8:15pm CST ~ 1 mo., 11 days ago.
It's pretty complex to a native English speaker.This is why:
en.wikipedia.org/wik i/Austronesian_align mentAlso:
en.wikipedia.org/wik i/Tagalog_grammarYou can also use the search here to find this question asked and answered before.Also,>“Ano(ng) ginagawa mo?” This is "What are you doing?" , not "What do you like?"

Mar 07 2021, 11:32am CST ~ 1 mo., 9 days ago.
So step 1. Search and learn the difference between ANG and NG and SA pronouns...both personal and demonstrative. And step 2. Search and learn how you use them in verb focus. Then...there will be some depende depende nuance as well. But get as many basics MUNA!Put the ANG NG and SA pronouns all in a tabular format...and just memorize them. Your understanding will accelerate by a factor of say 10...poof!
Reply 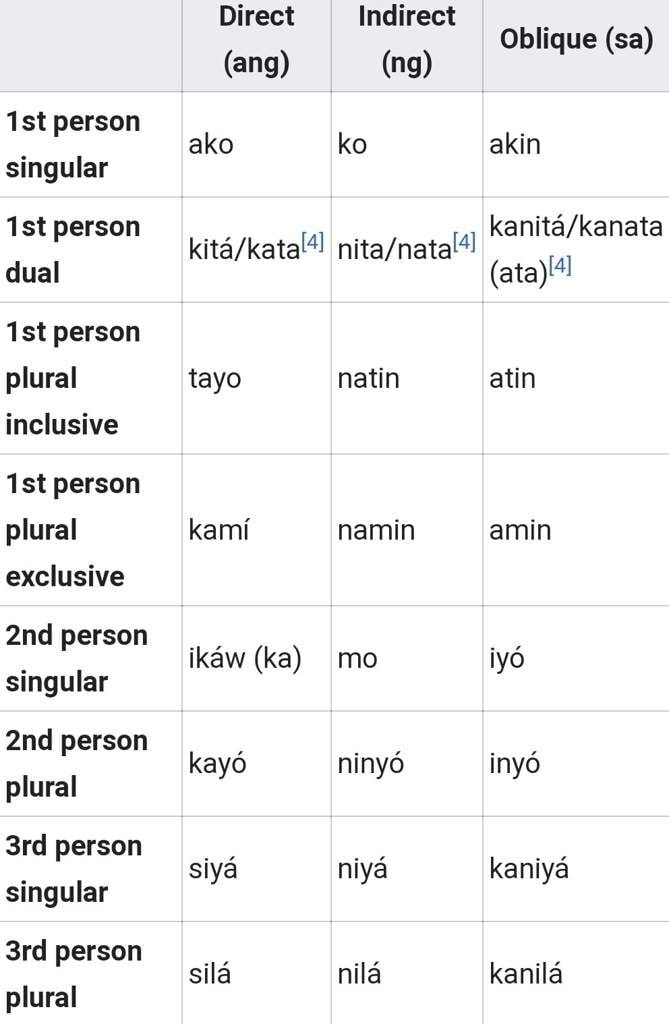 I forgot we can post images...poof...your personal pronouns,,,
Reply

Mar 08 2021, 12:16pm CST ~ 1 mo., 8 days ago.
@JoshuaC "What would you like?" would be "Ano ang gusto mo?"
As others pointed out, Tagalog uses a complex voicing system which also includes the pronouns, kinda like (but very different from) English they/them.Generally, "ano" questions mark the action that you're questioning with "ang" and the thing doing the action with "ng" (or the respective pronoun).Ano ang ginagawa mo?
what ANG doing NG-you
What are you doing?
"mo" is used because it is the NG form of "you"Ano ang gusto nila?
what ANG like NG-they-plural
What do they like?Ano ang kinakain ko?
what ANG eating NG-me
What am I eating?If you wanted to question something, you would mark the something with "ang" (or the respective pronoun):Ano ang "isda?"
What is "isda?" (fish)Ano ang pangalan mo?
What is your name?
("mo" and NG phrases can also mark possession. "pangalan mo" = your name; "bahay ko" = my house)Ano ito?
What is this?
(ito = ANG this)Ano iyan?
What is that?
(iyan = ANG that)Which verb form to use for the "ano action" questions...are a bit more complex to explain. Better to make it a separate thread.
Reply

Mar 11 2021, 12:46pm CST ~ 1 mo., 5 days ago.
@JoshuaC ....Everybody is correct, but there is a simpler way to differentiate KO and AKO ( or NG and ANG respectively ). It has to do with the verb - subject relation. When the verb is IN verb the subject is NG form, ex: ginagawa ko ang report, kinakain ko ang tinapay, iniinom ko ang beer; but, when the verb is UM/ MAG verb, the subject is ANG form, ex: gumagawa ako ng report, kumakain ako ng tinapay, umiinom ako ng beer, nagluluto ako ng pasta. Tagalog has a lot of verb affixes ( IN, UM, MAG, etc.)
Reply

Mar 16 2021, 2:04pm CST ~ 4 weeks ago.
@SiAko thanks. Maybe I am not clear in my desire. I think you make the assumption that the verb is known. In one respect, I am trying to understand how to communicate properly. To do so, I would need to be able to know what is the proper verb to use. Leaving this aside, maybe I can talk about my problem from a different perspective. Maybe I could ask? “Why are we saying ‘What the doing by you?’” Using passive voice seems very strange to an American. There are other examples of this in Tagalog. Gusto mo...is a simple example. Just trying to understand to reason behind communicating in this form.
Reply

Mar 16 2021, 3:21pm CST ~ 4 weeks ago.
Maybe I could ask? “Why are we saying ‘What the doing by you?’” Using passive voice seems very strange to an American. There are other examples of this in Tagalog. Gusto mo...is a simple example. Just trying to understand to reason behind communicating in this form.
@JoshuaC
Not sure I'm understanding the question here, maybe you can restate it?
Choosing which verb to use is actually a very big question and difficulty as a learner...( Personally, I avoid saying "passive voice" when discussing Tagalog verbs...the analogy just doesn't hold up very well, in my opinion...and seems to confuse more than clarify )
Or the sentence “Ano [ang] ginagawa mo?”. Why “mo”? Why not “ka” since the English is “what would you like?”
You have to use "mo" because "ginagawa" is an object focus verb, and you are the one "doing". If you used "ka" it would be as if someone is doing something to you, rather than you doing something (the direction of the action would be wrong).Why use an object focus verb instead of actor focus here? Because, that's just how the language is used...when you ask "What is that thing that you are doing/cooking/eating/punching/drawing/singing/'ing"...then you would use an object focus verb.
Reply

Mar 16 2021, 7:04pm CST ~ 4 weeks ago.
@JoshuaC I can understand your confusion. Perhaps these pointers might help: 1) Translate the sentences in the active voice not passive. 2) The quasi verb GUSTO generally takes NG subject , hence: Gusto ko ng libro; Gusto kong mag-aral; gusto kong aralin ito. 3) Tagalog has 2 classes of Verbs ATV ( actor focused) and GTV (object focused). The ATV takes ANG subject, ex: Gagawa ako ng report mamaya. ( I will make a report later.) but the GTV takes NG subject, ex: Gagawin ko ang report mamaya. ( I will do the report later) The affixes of the verbs determine to which class they belong. There is simply no avoiding learning the verbs if you are serious about speaking Tagalog. Hope this helps.
Reply

Mar 16 2021, 7:57pm CST ~ 4 weeks ago.
@SiAko There is at least one problem I have with your last reply. There is a difference between what something means and what is actually being said. In my little span of learning, I am told that “ka” is ‘you’ and “mo” is ‘your’. See my confusion? “What the doing your?” (My previous reply with “by you” for “mo” should have been “your”). If I made it helpful for me, an American, I would swap the VS. “What your doing?” But this still sounds strange.
I think @jkos may have a thread I can hold onto and follow. I will think over his thoughts.
Reply

Mar 16 2021, 8:15pm CST ~ 4 weeks ago.
@JoshuaC Ahh...I think I see the issue now after your last reply. @SiAko has some good advice here.But maybe what is missing is a confusion related to possessive pronouns.
Ex:
“ka” means you.
“mo” also means you, but for different verb types.
“mo” can also mean “your”.In these examples you’ve posted, it is being used as “you” and not “your.”This can be confusing...but just remember that the NG pronouns (mo, ko, niya, nila, etc.) can sometimes be used as regular pronouns meaning you, I, she, he, etc., and that they can also be used as possessive pronouns (my cat, your cat, her cat, etc.).
Reply

Mar 16 2021, 8:51pm CST ~ 4 weeks ago.
@jkos that's totally right.
@JoshuaC you are correct. KA is you subject and MO is your possessive adjective. This is absolutely right in a verbless sentence. Ex: Nasa Makati ka ngayon ( You are in Makati today) and Nasa Makati ang kaibigan mo ngayon ( Your friend is in Makati today). However, when you make a sentence with a verb: KA may be used as a you subject or object and MO may be used as a you subject and your possessive adjective.
Ex: 1) Nagluto ka ng pasta para sa nanay mo. ( You cooked some pasta for your mother- notice the use of KA (subj) and MO(poss. adj) in the sentence).
The same sentence: You cooked some pasta for your mother may be translated:
2) Nilutuan mo ng pasta ang nanay mo . ( The translation is the same but the context to use each sentence is different and notice the use of MO (subj and poss. adj) but,
3) Nilutuan ka ng pasta ng nanay mo. ( Your mother cooked some pasta for you- notice ka is now the you object )
The changes have to do with the verb. Hope this helps mitigate the confusion.
Reply

Mar 16 2021, 11:09pm CST ~ 4 weeks ago.
@JoshuaC
If it helps with getting your head around it, NG can also be *kinda* translated to "of" in English in the sense of possession.pangalan mo
name NG-you
"name of you"
your namebahay ni Juan
house NG Juan
"house of Juan"
Juan's house
("ni" is the same as "ng" but used for people)bubong ng bahay
roof NG house
roof of the houseYou can usually tell whether a NG is grammatical or possessive. It's unlikely that you'll ever run into an ambiguous case. A good rule of thumb is that possessive NGs come right after nouns, while grammatical NGs come right after verbs. Kinuha ko ang salamin ko.
got NG-me ANG glasses NG-me.
"I got the glasses of me."
I got my glasses.What can be ambiguous are the grammatical NGs such as in this sentence:Binigyan ko ang kaibigan ko ng candy.
gave NG-me ANG kaibigan NG-me NG candy.But another rule of thumb is that the actor, the thing doing the action, is usually very near the verb. So you can assume that NG-me is the one that "gave," and NG candy is what's being given. NG-me is possessive, following our rule of thumb.gave NG-me = I gave
ANG kaibigan NG-me = my friend
NG candy = candy
I gave my friend candy.Now, there's also the question of ANG-what's it doing there, and how does it play with the NGs. You see, Tagalog has a 3rd voice-this one is called "locative" or "directional" or some lingo. It marks what *should* be a prepositional phrase with ANG, and everything else with NG. Compare it with this analog, in the "patient" or "object" or something voice:Binigay ko ang candy sa kaibigan ko.
gave NG-me ANG candy SA friend NG-me.
I gave the candy to my friend.(SA phrases are analogous to prepositional phrases, with SA by itself encompassing in/at/to/on.)I should also point out that ANG usually marks what's definite, or what you want to emphasize. That's why it's usually translated to "the" in English.Of course, there's a lot more to it, but hopefully this helps you get around it.