I searched the word 'ay'. I think there is a need to re-study

Sep 05 2021, 2:22pm CST ~ 2 weeks, 6 days ago.
I searched the word 'ay'. I think there is a need to re-study the definition or the association of linking verbs to 'ay'. People would normally assume that 'ay' seems to mean 'to be, is' or equivalence given the profound inadequacy of Filipino education in the Philippines. I think that it should be clarified how it was also used rather than defining it simply as 'katumbas' or 'equivalent' of linking verbs. Since, 'ay' is a sentence inverter. The form of the 'ay' sentence have been widely used in the Philippines considering how Manila-Tagalog is the perpetuated style of Tagalog in teaching Filipino. I am not stating that we should not use this fluidity, however, I do think that it must be clarified that 'ay' as a linking verb 'to be, or is' (I'm not completely sure about this) that this is a more western influence (I could even say corruption but I'm trying to be neutral as much as I can). Maybe, it might give light to provide historical origin of 'ay' as a particle/word used, it's actual function and assumed function. There is no 'ay' in Tagalog actually. This is probably a European addition to fit the translation structure of European sentence structure (I would assume). I'm sad that in schools, teachers and students have mistaken ay as a linking verb counterpart. It must be recognized that the use of 'ay' sentence structure is mostly contemporaneously optional given a cultural amnesia (this is not completely an impossibility either).
Reply

Sep 06 2021, 6:18am CST ~ 2 weeks, 5 days ago.
@OmpongIbarra Actually it matters because it changes the way we look at how Tagalog sentences are constructed. And the statement is not profound. It's only exhaustive and I do not think that it's should be belittled. Actually, it's healthy to study words no matter how "diminutive" they may be. The study of words is called lexicography. To insult the attention given to a single term such as 'ay' is ignorant.This dismissive attitude towards the tendency in exhausting our understanding about language is myopic. Questioning even the little things are important.|For example:
Your expression the use of 'ay' in "Ay naku!" is wrong and misspelled.
It should be 'Hay' because it is an interjection of grievance, exhaustion, or disappointment. Whereas 'ay' is only a sentence inverter and does not have any meaning. Instead, it has a grammatical function which is more syntax-based rather than semantic-based. That means, it's about implied structural function compared to overt associated meaning. So, instead of "Ay naku!," it should have been "Hay naku!" "Ay naku!" was either written carelessly or a sentence fragment waiting for a psuedo-simuno or subject with a wrong punctuation which can ultimately change what naku would mean. "'Psuedo-simuno' ay naku." See, it matters.But obviously, since I'm a native speaker and understand what you were trying to IMPLY, these things may not matter to people like me given that I can use my cultural understanding and context clues to figure out what could be perceived as wrong construction. However, this is not okay. Especially, now, in the 21st century, we are plagued by amateurish attitudes towards the study of local language because the global capital demand does not side with the local languages but the English language. As you can see, this Tagalog.com site is not even monolingual because it serves a general audience. We hardly even find monolingual dictionaries at all. Other dictionaries are made lazily with transliterations rather than actual translations which both do have their benefits and limitations. In short, the Tagalog language and its local terms are not being learned. We have extremely assimilated with European culture which 'ay' as a 'diminutive' particle is a token of our trauma.This is a dictionary site. There are more people who are careless about grammar or who would not even give the time and attention to analyze words and syntax thoroughly. So I take with offense belittling the effort of exhaustive discourse. Instead, act with obnoxious attitude of "anything goes" and "basta yun". This kind of amateurism should not be tolerated within the ranks of people understanding the language seriously.Imagine if people teaching arithmetic did not care about the order of variables in a subtraction equation, they would flip. But when it comes to syntax and the use of 'ay' with a comma before the term is seen WITHOUT regret or attention. If you try to check the government's KWF grammar book, the composition was written poorly. It was like a person who translated an English composition and carelessly "translating" it to Filipino. Who the **** uses a comma before the term 'ay' apparently the greatest minds of the 21st century in the country. It is sickening. They call themselves standardized. Yes, my rant goes way deeper, and the likes of you are like these geniuses running the country and being paid hefty amounts of money just to write for the sake of writing and being paid by honest tax payers for such a book the no one would probably read because they have ****ed every chance of learning local languages. They don't give a **** and the likes of you carelessly saying 'Ay naku'. Nakakabuwiset!
Reply 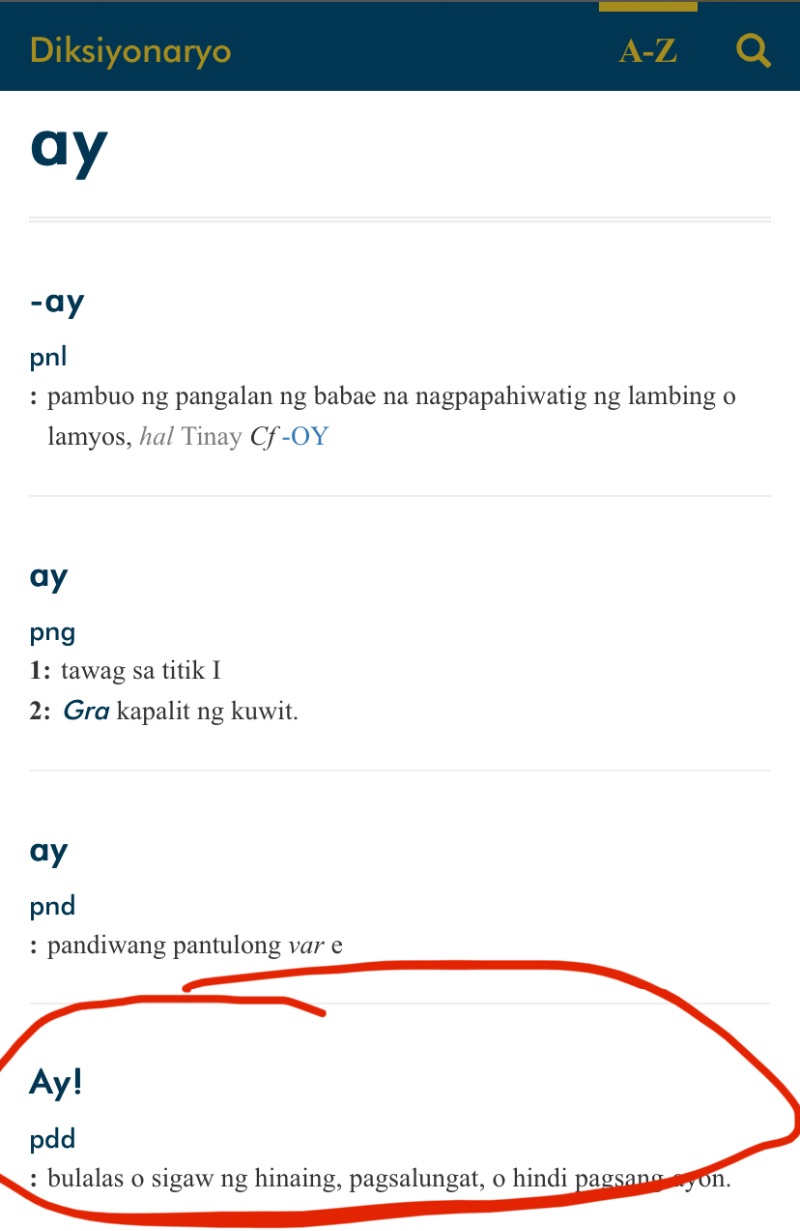 Ay! Is a valid word just to be clear. Doesn’t have to be “hay”.@nickchase327
Reply

Sep 06 2021, 3:08pm CST ~ 2 weeks, 5 days ago.
@PinoyTaj This dictionary is not even peer reviewed. It doesn't mean you cite a dictionary means that it automatically validates what you want to think it means especially the likes of dictionaries that is not validated by a university. And the context of 'ay' there is not the same as 'hay naku'. Also, 'ay' and 'hay' are very different in meaning. They are nuanced.
Reply

Sep 06 2021, 3:11pm CST ~ 2 weeks, 5 days ago.
@PinoyTaj It is not language dictating. Being dismissive about exhaustive discourse is not wrong. And you're attempt of dismissing the fact that I corrected his example does not entail that you are right. Look at it closer. Don't just reply out of the intention of rebuttal. Try to understand it carefully. You will see that 'Ay!' and 'Hay naku!" are very different in semantics and in syntax.
Reply

Sep 06 2021, 3:16pm CST ~ 2 weeks, 5 days ago.
PinoyTaj It is not language dictating. Being dismissive about exhaustive discourse is not wrong. And you're attempt of dismissing the fact that I corrected his example does not entail that you are right. Look at it closer. Don't just reply out of the intention of rebuttal. Try to understand it carefully. You will see that 'Ay!' and 'Hay naku!" are very different in semantics and in syntax.
@nickchase327 You’re trying to dictate bro.“Hay naku” and “Ay naku” are both valid

Sep 06 2021, 3:20pm CST ~ 2 weeks, 5 days ago.
@PinoyTaj They are valid for implication but they are not of the same nature. "Ay naku!" is mostly written for informal writing like texting, etc. "Hay naku! is used for a more formal writing such as novel writing, newspapers, etc.
Reply 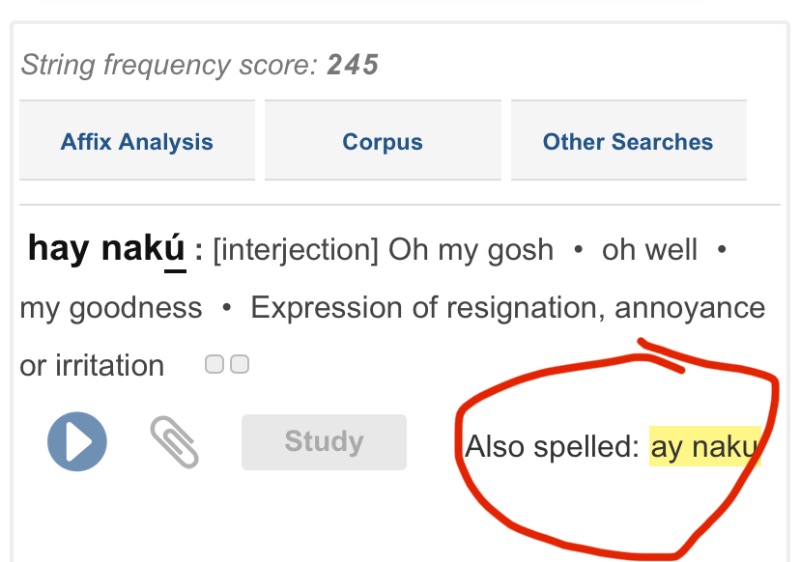 @nickchase327 Ay naku is valid and used by native speakers. It’s is referenced in the Corpus and the dictionary. The corpus pulls data from multiple place to give its information not just the dictionary. They are both valid …
Reply

Sep 06 2021, 3:23pm CST ~ 2 weeks, 5 days ago.
@PinoyTaj Yeah I already replied about this. PinoyTaj besides nitpicking the conversation, you should also look at the other point of the thread. I was pointing out that he was being dismissive.
Reply
12345»
Post a Reply»