Question: Hi. I have just done the first pronunciation drill. in

by: MustangMike
Sep 27 2020, 12:49am CST ~ 3 weeks, 7 days ago.
Question: Hi. I have just done the first pronunciation drill in the lessons and it appeared that they pronounced "a" as in back instead of like in father and said that was right. Could someone explain this? Also What does ' mean above a letter?
Reply

laidrecto
Sep 30 2020, 12:37pm CST ~ 3 weeks, 3 days ago.
Letter "a" is pronounced as spelled in Filipino. "Back" as example is correct. The ' above letters indicate how a word is pronounced. It is called accent marker in English.
Reply

Sep 30 2020, 12:56pm CST ~ 3 weeks, 3 days ago.
Question: Hi. I have just done the first pronunciation drill in the lessons and it appeared that they pronounced "a" as in back instead of like in father and said that was right. Could someone explain this? Also What does ' mean above a letter?
Hi @MustangMike
Can you tell me which one this was? Typically, the "a" in Tagalog sounds more like "father" and not like "back".If you're talking about accent marks above the vowel, it indicates which syllable gets stressed.
More info and examples here:
www.tagalog.com/less ons/lesson.php?lesso n_id=26&csid=33
Reply

MustangMike
Sep 30 2020, 9:36pm CST ~ 3 weeks, 3 days ago.
@jkos Well I can't remember which word it was exactly. It seems like it was a word that started with a k. Also in that there was a word that had ` above a different letter than was underlined. I'll tell you when I see it again. 😃😃
Reply

MustangMike
Oct 01 2020, 2:01pm CST ~ 3 weeks, 2 days ago.
@jkos Yes that's the one. In Ospital, and aklat, It sounds like the one they say is right has the wrong a. Payapa has second a underlined but the accent mark is on the third a. Thanks for the help and patience and for responding😃
Reply

Oct 01 2020, 2:20pm CST ~ 3 weeks, 2 days ago.
Hi @MustangMike I can see your confusion on the "ospital" recording...I've removed for now, waiting for a better recording from our audio person.The payapà recording however does indeed have the accent on the 2nd "A". However, there is a glottal stop on the last syllable of the word, and that can distort your hearing of the accent location...I've noticed this as well when I was starting out. The final "a" has a glottal stop, similar to the stop between the h and the o in "uh-oh". This can sometimes make it sound like that syllable is stressed when it's not.
www.tagalog.com/word s/payapa.phpThere's another example I found, so maybe you can hear the difference a bit better...asiwà =

(similar to payapà where the accent is on the 2nd to last syllable, but there's a glottal stop on the last syllable)asiwâ

kenneth999
Oct 01 2020, 9:40pm CST ~ 3 weeks, 2 days ago.
@jkos But I don't understand how the accent mark over a letter AND the underscore means that's where the accent is. Most of the time I think they're on the same letter, but your examples here have them on two different letters. Isn't this an error? They can't both be accented.
Reply

Oct 01 2020, 9:52pm CST ~ 3 weeks, 2 days ago.
@kenneth999 No, not an error. An accent slanting one way indicates stress, the other way indicates glottal stop.I super recommend reading this page, it has audio and a bunch of examples for the three types accent marks.
www.tagalog.com/less ons/lesson.php?lesso n_id=26&csid=33
Reply 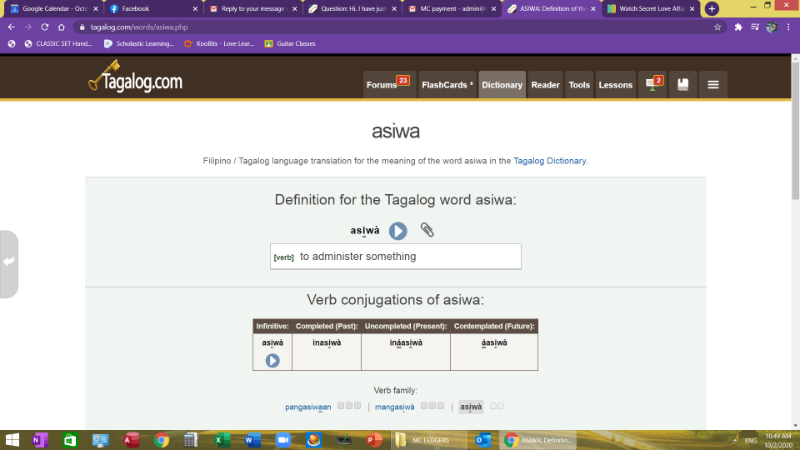 @jkos may I correct the dictionary here of asiwa? www.tagalog.com/word s/asiwa.php
asiwa for administering is not the proper root word. Administering in Tagalog is "pangasiwaan." It is a noun and for it to become a verb, you have to conjugate it: past: pinangasiwaan, present: pinangangasiwaan, future: pangangasiwaan.There is only one asiwa meaning in Tagalog, and that's the adjective meaning to get annoyed or uncomfortable.
Reply

Oct 01 2020, 10:02pm CST ~ 3 weeks, 2 days ago.
@laidrecto The accenting is correct for both. Source for this is the Leo James English dictionary, as a variant. See attached pic. The James dictionary which is one of the more respected dictionaries out there. Could it be a regional difference?
Reply

laidrecto
Oct 01 2020, 10:16pm CST ~ 3 weeks, 2 days ago.
@jkos I am a native Tagalog speaker and I never encountered a word 'asiwa' or 'ngasiwa' as a root word for administering/administration. That is completely wrong. There is no regional difference here as we are talking about Filipino language and not just Tagalog. In the country, we call national agencies as "Pangasiwaan" for administrations of different branches. So it is mainly use as a standard noun.Leo James, though he made the first Filipino-English dictionary, is not a researcher but a priest who collected dictionary words. For a more reliable Filipino-English translations, please refer to Filipino university professors authored dictionaries. I recommend Joi Barrios, she used to teach Filipino language and culture locally and in UC Berkeley. She also studied other Asian culture and languages to compare with Filipinos' and has a PhD in Filipino Culture and Studies program.
Reply

Oct 01 2020, 10:31pm CST ~ 3 weeks, 2 days ago.
@laidrecto Ok, good feedback about asiwa. I don’t mean to sound skeptical, but you would not believe how many times I’ve heard that a word doesn’t exist by a native speaker, and then I’m able to pull up many examples of that word used by Tagalog newspapers, for example. Not so in this case though.
Reply

laidrecto
Oct 01 2020, 10:43pm CST ~ 3 weeks, 2 days ago.
@jkos Yes, newspapers are reliable sources of usage reference. Jut to make you comfortable, I am a Journalism graduate (although I didn't practice writing as a journalist) as I felt more comfortable working in the research for academic and industrial writing).

kenneth999
Oct 02 2020, 10:50am CST ~ 3 weeks, 1 day ago.
@jkos Thank you for your clarification about accent marks and the different kinds. I am an extreme beginner, and I didn't realize there were two different slants. Thank you for the great website!
Reply
12»
Post a Reply»

CORPUS
Become a patron
We love our supporters! :)
© copyright 2020. Do not reproduce content or audio without prior written authorization. We put a lot of hard work and TLC into this website -- please don't copy our content without permission.