Question: Where do you put your tounge for n, d, l, t, (e.t.c.), sounds when speaking Tagalog in a native Tagalog/Filipino accent? To me it sounds like native/advanced speakers put it further forward on the ridge of their tounge, behind their teeth, but maybe I am wrong. Here is a picture above to visualize my question. I want to sound more like a native speaker when I speak Tagalog.
Reply

Bituingmaykinang
May 14 2021, 7:40pm CST ~ 1 year, 9 mos ago.
I put it like on the first diagram whether I speak Tagalog or English. Didn't know tongue position mattered. Lol
Reply

May 15 2021, 9:18am CST ~ 1 year, 9 mos ago.
To attempt an answer (while awaiting akosikoneho), not only position but aspiration is a component of their pronunciation. From A Tagalog Reference Grammar section 1.4 Voiceless stops : The Tagalog phonemes /p/. /t/, and /k/ differ from their English counterparts ... in several ways. In the first place, the English phonemes have ASPIRATED allophones which occur at the beginning of stressed syllables, while the Tagalog phonemes are UNASPIRATED in all positions.
In addition to the consistent absence of aspiration, two of the Tagalog stops, /t/ and /k/, differ from their English counterparts in point of articulation as well. Tagalog /t/ is dental. while English /t/ is alveolar. Tagalog /t/ is never voiced, regardless of its position in a word. 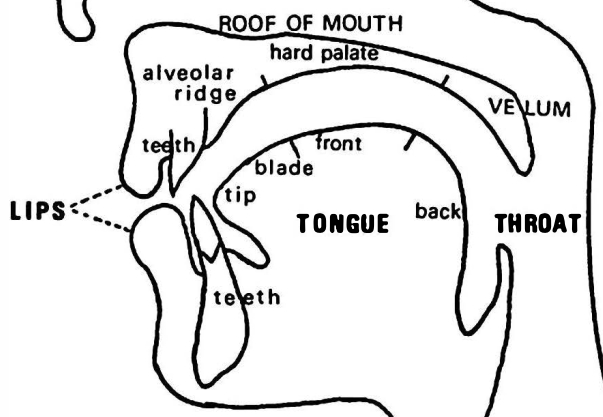 Teacher
May 15 2021, 2:38pm CST ~ 1 year, 9 mos ago.
The Otanes book says dental, but I suspect due to American influence some speakers have alveolar positions. Unaspirated is the norm, but you do hear some aspirated stops from anglicized speakers.Edit: I should read more, Repolyo posted a longer take on it that says what I said in more detail.
Reply

© copyright 2023. Do not copy or reproduce content or audio without prior written authorization. Scraping and republishing our data is a copyright violation. We put a lot of hard work and TLC into this website -- please don't copy or publish our content without permission.